At rtCamp we are striving to bring that positive change, which impacts lives of millions of users who are/will be using our products.

Its about 8 months since rtPanel was launched and we have more than 8500 downloads. We have been constantly getting user feedback, criticism, appreciation and suggestions. Considering user demands and current technology trends we decided to do some major changes in rtPanel Framework to make it more quality oriented and to enhance the user experience.

Surprisingly rtPanel version 2.1 is approved in less than 10 hours by WordPress theme review team as there were no errors reported. Now, the new version is available for users to download. 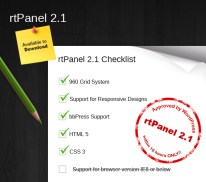 Below are the changes in this major release:

The new version has already been approved by WordPress and is available to download. You can also fork it on GitHub and see the latest development.

Please note that as its a major release; CSS may break since we moved to HTML5 markup and added 960gs grid support. If you face any difficulty, please feel free to contact our Support Forum, we would always be there to answer your concerns.

We will soon release a small version for WordPress 3.4 features’ support. So stay tuned. 🙂