A few rtCampers recently attended WordCamp Bhopal 2016 at Lakshmi Narain College of Technology (LNCT), Bhopal, India’s “City of Lakes”. As mentioned in our previous post, our visit was going to be a short one.

WordCamp Bhopal 2016 was completely organized by the Bhopal WordPress meetup group, which consists mainly of college going students with support from LNCT. The latter is particularly exciting for the FOSS community in India, as it shows the changing attitude (at least by a single institution) toward all things open source in an education system that often associates anything “open source” with “inferior”.

Majority of the attendees were 2nd – 4th year college students who had little to no prior exposure to WordPress. This WordCamp presented them with a peek into the possibilities of the platform and the community associated with it.
The (un)conference saw the speakers clear a great deal of misconceptions associated with WordPress.

rtCamp’s Rahul Bansal was one of these speakers, and spoke about the challenges that come with building a high quality WordPress agency in South Asia. He was also part of the panel discussion on “careers in WordPress”. 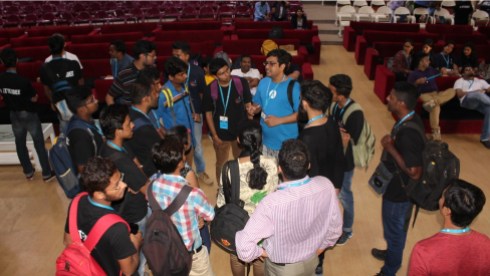 The Bhopal WordPress meetup group did a great job with organizing the event. Barring some initial technical glitches, the event proceeded smoothly. Venue, registration, transport and food were all well planned. The organizing team was quick to address any concerns or questions.

Overall, the first WordCamp in Bhopal channeled the true spirit of any WordCamp- to “provide an informal platform for everyone to participate, share ideas and get to know each other”. See you next year! 🙂