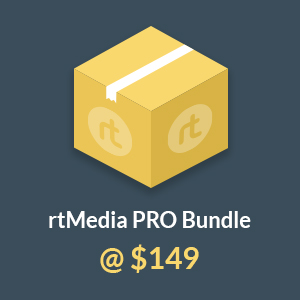 A few days ago, we split our rtMedia-PRO plugin. After split, we now have 31 addons (WordPress plugins).

While we wrote about our decision a couple of days before we made the change, some of you might have felt the advance warning was a little on the short side.

The common complaint by some prospective buyers was rtMedia-PRO was $149 previously and the bundle is now $399.

I think on retrospect we felt the price change should have been announced atleast a week before it was made and not two days as it ended up being.

Actually, we wanted to give 15-days window for a prospective buyer but our developer team finished their job earlier than expected and the announcement post got delayed by a couple of days. So the window for buyers was squeezed a bit!

Hence, now we are planning to temporarily switch the price to $149 for the whole month of June. So if you buy the rtMedia-PRO bundle, the price is $149 until the 30th of June, 2015.